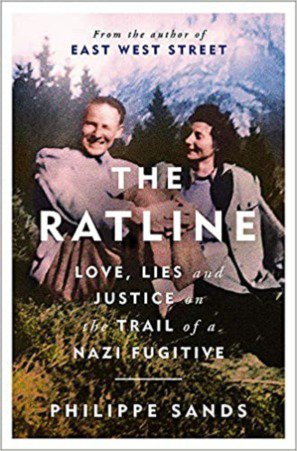 The Ratline: Love, Lies and Justice on the Trail of a Nazi Fugitive

As a title, ‘The Ratline’ is a slight misnomer, as the escape route for Nazi fugitives takes up only a minor part of the book — and much of that is tangential, as the main character never actually used it. However, as a tale of SS Brigadeführer Otto von Wächter’s rise to Nazi power, and his subsequent attempt to flee justice with the support of his wife (despite his repeated unfaithfulness during the previous decade) and others; intertwined with the equally compelling tale of the author’s own attempts — with his family connections to some of von Wächter’s many, many victims — to track down the fugitive and, at the same time, try to understand von Wächter’s son’s refusal to accept his father’s wrongdoing, this book is unputdownable.

This book is, fairly obviously, the follow-up to Sands’ 2016 work ‘East West Street’ where he discussed the ins and outs of the connections between leading Nazis, their victims and the legal minds that ensured words like ‘genocide’ and ‘crimes against humanity’ entered the legal lexicon after WWII. During the writing of the first book, Sands met Niklas Frank, who accepted his Nazi father’s guilt for the crimes that father had committed, and Horst von Wächter, who didn’t. As the elder von Wächter did not face justice at Nuremburg, Sands wants to know ‘whether justice was done’, and so accepts the invitation to meet Horst. It is the follow-up to that meeting which leads to this latest book. Horst is clearly a man with a mission — a mission to exonerate his father. According to Horst, it was the system his father served that was at fault, the man (according to the son) did all he could to alleviate the conditions of the Poles, the Jews and so on. Of course, as with most things, the situation is a little more complicated. Horst was born in 1939, and saw little of his father during the war, even less afterwards. Given that Otto von Wächter died in 1949, it becomes clear through the book that Horst’s defence of his father has more to do with his obsessive closeness to his mother, Otto’s wife, Charlotte. Indeed, Horst’s wife Jacqueline left him because of this — only returning to him once Charlotte was dead (in the 1980s).

According to Jacqueline, Charlotte was ‘a Nazi until the day she died.’ Not least because of von Wächter’s rule over the territory where Sands’ grandfather’s family — and other relatives — were exterminated, Sands seeks to find the truth about the SS Brigadeführer. Unfortunately for Horst, the more evidence Sands uncovers, the more implicated von Wächter appears to be. About the only thing to be said in von Wächter’s favour is his attempts towards the end of the war to make sure the SS division he raised from Ukrainian volunteers was allowed to surrender to, and be helped by, the Western allies, rather than face summary justice from the Red Army. Then, of course, von Wächter disappeared so he could avoid justice himself. And, in 1949, he was killed — at least that is Horst’s assertion. By this time, it is difficult for the reader to feel much sympathy for either von Wächter: it is obvious that Otto had ordered the creation of ghettos, and had supervised the death of many people, Jews and others, even if he had not pulled any triggers himself. After the war, with Charlotte’s support, he had remained on the run for three years before making his way to Rome, to join the Ratline so he could get away to Latin America. In Rome, he had had support, including from a Vatican bishop, but, by the middle of July 1949, he had died in hospital, officially of yellow fever atrophy and severe jaundice; but, in the post-Nazi and early Cold War era, there were other possible options that Sands is obliged to pursue — and this reader was certainly intrigued enough to follow along. As Sands discovers, had he but realised it, by 1949, von Wächter could have been safe with the Americans (he might even have been ‘safe’ with the Soviets, but his virulent anti-Communism would have made his cooperation with the USSR unlikely): the USA was becoming less interested in rounding up former Nazis for justice, and more interested in the realpolitik of Cold War relations, and wanted to use the said Nazis for intelligence work if at all possible. And von Wächter, as a former senior Nazi operating in what had become a Soviet part of Europe, would have been an ideal candidate.

In fact there is evidence to suggest an approach had been made — whether by the Vatican bishop, or an ‘old comrade’ — so that von Wächter could offer his services. But as for ‘elimination’? The idea that the USA, or even the Soviets, would seek to assassinate von Wächter, even if he had turned down an offer to work for them is unlikely in the extreme. From what Sands found out, the line is generally (spoiler alert!): why would they bother? It seems the truth is that von Wächter died ‘because he liked to swim’ and had swallowed some infected water from the polluted River Tiber or a local lake. However, what is intriguing from Sands’ research is how easy it would have been for von Wächter to disappear — especially if he had been able to make contact with the American secret service. A secret service whose head controlled the agent who was von Wächter’s ‘old [Nazi] comrade’. Also, this American’s illegitimate son (in a twist no novel could get away with) married the old comrade’s daughter, and they in turn have a child — a child who had one grandfather who was a senior Nazi, and the other was the man in charge of the organisation officially tasked with bringing the former to justice, but used him as an agent instead! But the relationship between the grandfathers rather supposes that the Americans knew exactly where von Wächter was all along. Sands turns up evidence to suggest they did.

Sands leaves the reader to make what they will of how quickly post-WWII efforts at justice were taken over by Cold War spying games, and its effect on notions of the afore-mentioned justice. Either way, von Wächter died, and his son ended up by being disappointed both by the results of Sands’ research, and by his own daughter’s summary of her grandfather: ‘My grandfather was a mass murderer.’ For a telling tale on what a Nazi legacy can leave, and what the pursuit of justice can involve, I recommend you read this book.