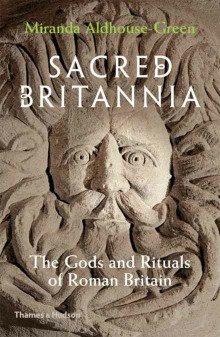 Book Author: MIRANDA ALDHOUSE GREEN Review by: Antonio Battagliotti Miranda Aldhouse-Green’s Sacred Britannia casts a huge shadow. It manages to be accessible to the casual reader who penetrates the area of Romano- British religious syncretism while adhering to the strict scholarly conventions of the academic world. Accordingly, underlying this meticulous survey of religion and beliefs […]

Sacred Britannia: The Gods and Rituals of Roman Britain

Miranda Aldhouse-Green’s Sacred Britannia casts a huge shadow. It manages to be accessible to the casual reader who penetrates the area of Romano- British religious syncretism while adhering to the strict scholarly conventions of the academic world. Accordingly, underlying this meticulous survey of religion and beliefs during the 400-odd years of Roman occupation in Britain is a challenge to the assumption that a particular set of beliefs eventually won out over the rest. As Aldhouse- Green masterfully argues, there are many instances in which Iron Age beliefs may well have survived into Roman Britain, making its religious experience unique. Structurally, the book is divided thematically and considers Roman and British religious attitudes and practices side by side, showing how some practices eventually merged into a whole while others gave impetus to the rise of new cults.

In this respect, Roman gods were essentially supernatural versions of human beings and people thought of their relationship with the gods in contractual terms. Summoners would ask for divine favour and, if the favour was granted, they would return it with a votive gift. By contrast, in Gallic and Britannic mythology, worshippers experienced a world much different from the human one; a sort of dimension represented by the crossing of the boundaries between realism and surrealism. This concept has its roots in the Iron Age tradition of otherness whereby divine forms dwelled outside the normal template of human and animal imagery. Therefore, the Gallo-British pantheon is populated by entities with shape-shifting abilities, such as people with horse heads or horns, and even bird men.

A whole chapter is dedicated to symbolism where the author’s immense expertise in prehistoric and Iron Celt comes to the fore. Based on the preference for twisting real life to create other canons of being, Celtic symbolism can be traced back to the Iron Age artistic tradition known as La Téne, which produced a rich array of fantastical creatures ranging from human-headed horses to nightmare human faces and hybrid bull-horned horses and cats’ faces that morph into owls when the onlooker stares at them. The remains, in turn, indicate yet another exquisitely schematic habit of Roman Britain. This practice eschews the typically Roman representation of gods portrayed as human beings to embrace a kind of imagery that deliberately omits details and relies on mere outlines. Such minimalistic choice is based on the idea that a sculpture is meant to convey a message.

A good example of such evocative minimalism is the little plaque from Cirencester (Corinium) depicting the three Genii cucullati (hooded spirits) whose slanting legs depict them scurrying off to the viewer’s right, one behind the other. The body of each figure is represented by a single triangle, the only detail of their heads being the side-projection of the hood. Thus, the schematic carving from Cirencester should be understood as a black canvas upon which worshippers had the capacity for their own endowment of meaning. Aldhouse-Green does a great job of presenting such a riveting description of Gallo-British symbolism, providing an equally outstanding interpretation of Romano-British syncretism. This process did not occur in stages and its outward manifestations are multifaceted.

Whereas the catalysts for the dissemination of Roman religion in Britain were obviously the Roman army and the administration, reducing Romano-British syncretism to the wholesale absorption of befitting local deities into the Roman pantheon would be overly simplistic. On the contrary, Roman Britain was characterised by the co-existence of religious cults whose interaction fostered continuity with the past while giving impetus to the creation of new ones. Such diversity reflects the multi-ethnic make-up of the Roman army stationed in Britannia whose members were not just from Italy but hailed from all corners of the Empire. This, in turn, fostered a two-way process of religious identity negotiation whereby existing cults were adopted and vice versa and their rituals enhanced through the import of typically Roman ‘worship technologies’ such as epigraphy and iconography. One way in which this occurred was through what John Creighton has called the ‘creation of the familiar’ in his book Britannia: The Creation of a Roman Province. Roman Gods were given Romano-British names and the same god was oftentimes depicted differently.

We can find evidence in two strikingly different representations of Mars, the Roman God of War. A bronze figurine of Mars retrieved from the Foss Dyke canal in Lincolnshire portrays the warrior God as conforming to the human-like Roman canons. Conversely, a piece of sandstone retrieved at Maryport, a Roman fort on the Cumbrian coast south of the western edge of Hadrian’s Wall, reveals a version of Mars exquisitely Gallo-British in style: a spear and a shield and a huge head typically too large for the rest of the body which is adorned by bulbous horns. We should not be too surprised about the striking differences in portrayals of the same gods.

As Aldhouse-Green quite often reminds us, the process of syncretism was a two-way street whereby elements of one religion were adopted by the other and vice versa. It makes perfect sense that British gods such as Antenociticus and Brigantia were adopted by soldiers stationed on Hadrian’s Wall. This two-way process is by no means restricted to the army. A similar case is explored in the chapter on urban centres and the countryside. Accordingly, Romans and Gallo-Britons had different ideas of the organisation of space in terms of worship places. As far as the Romans were concerned, the countryside was a chaotic place far away from the settled order of urban spaces while Iron Age Britons performed their rituals especially in the countryside, a practice scorned upon by well-educated Romans. In Roman Britain, urban and countryside shrines conformed to similar architectural canons. In some instances, there is clear-cut evidence for Iron Age sanctuaries predating the Roman Conquest, but in some other cases, Iron Age cults can only be discerned by remains of ritual activity beneath or alongside Roman sacred buildings. However, we can find evidence for this two-way process in the presence of Romano-Celtic temples by dint of their distribution all over Britannia, ranging from major cities like Caerwent in South Wales to more remote areas such as Woodeaton, Oxfordshire. In cities such as Cirencester (Corinium) in the Cotswolds, where there is virtually no evidence for temples or shrines, we can still find a lot of evidence in the form of rich group of stone images which must once have adorned sanctuaries.

In accordance with Aldhouse-Green’s interpretation of the archaeological surveys that have been conducted since the 1970s, Cirencester somehow epitomised Romano- British syncretism as it was a vividly religious town whose inhabitants worshipped deities ranging from Gallo-Roman ones such as Cernunnos to Roman State Gods which included Jupiter, Mercury, Minerva and Diana, along with Roman Gods with a Celtic side. In Gaul and Britain, Mercury acquired an indigenous consort, Rosmerta while Jupiter was given qualities which were decidedly Gallic or even Germanic. Evidence for these Gallic features can be found in fragments of a Jupiter-Giant column where he is depicted as a sky-horseman. These motifs clearly reveal a wonderful blend of Roman and Gallic iconography as the two religious mindsets overlapped. The all-ecompassing nature of Romano-British religious syncretism is by no means confined to Iron-Age Celtic gods and Roman deities.

Accordingly, there are two chapters respectively dedicated to the spread of oriental cults such as the introduction of Mithraism and the adoption of Christianity in Roman Britannia, both occurring around the fourth century AD. In both instances, these ‘new’ religions were initially taken up by high-ranking and wealthy Romano- Britons who may have been more receptive to monotheistic ideas than ordinary people, who may have been entrenched in their prejudice against mystery cults. While highlighting tensions between early adopters of Christianity and die-hard pagans, the chapter on Christianity also challenges the idea that early Christians were always straightforwardly radical, surmising that objects related to pagan cults may well have been dressed up in Christian clothes.

There is evidence for this complex relationship between paganism and Christianity at the shrine of Apollo at West Hill, Uley in Gloucestershire. The Romano- British shrine at Utley went through a number of modifications during its life and yet when early in the fifth century the temple was levelled, the head of the cultstatue dedicated to Apollo was left unscathed and may well have been re-used as the head of a statue of Christ at the Christian church built upon the original shrine. From a methodological perspective, Aldhouse-Green conducts a flawless and meticulous analysis of each source at her disposal and draws general conclusions about the religious make-up of Roman Britain as a whole. In doing so, she also warns about the pitfalls of Roman literature.

Being Iron Age Britons illiterate, they left no first-hand testimony about their religious practices; therefore, most of what we know about them comes inevitably from Roman chronicles. While material remains are objective, historians can never be wholly unbiased in their description of events because these are inevitably coloured by their cultural background. This frustrating issue can be best understood in the chapter dedicated to the druids, who were the highest ranking religious and political officials in both pre-Roman Gaul and Britain. Biased and oftentimes inaccurate Roman sources (such as Pliny the Elder, Tacitus and Juvenal) present them in extremely belittling terms, dismissing their practices as barbarous and cannibalistic rituals, which in turn leaves historians with no choice but to engage in intelligent speculation. Accordingly, when Roman sources appear to be too biased, Aldhouse-Green tries to bypass the stumbling-block by drawing comparisons with the medieval literary evidence of ancient Irish tradition, as the Celtic island was never annexed to the Roman Empire.

Aside from these occasional references, Aldhouse-Green mostly relies on comparisons with Gaul to draw conclusions about the Celtic cults predating the Roman Conquest. A quirk of Sacred Britannia is the application of modern ideas and concepts to thousand-year-old tensions, anxieties, and misrepresentations between cultures and religion. While some people might find this approach questionable, I have appreciated it to the fullest because the use of modern keys is capable of opening doors into the far-off world of two thousand years ago. The relevance of attitudes pervaded by that ‘us’ and ‘them’ sense, in turn, reflects the opposite distinction between the familiar and the other, which is a modern concept that resonates perfectly well with the mindset of two thousand years ago. In the author’s own words, ‘the study of the past is fascinating in itself but it can be more than that if we can relate it to the world we currently inhabit’. Her statement carefully signposts the caveat that we should avoid building a scaffolding of scaremongering stories about those different from us. She homes in on this point when she draws parallels between anti-Roman and pro-Roman attitudes in the first century AD with pro-EU and anti-EU ideas in the wake of the 2016 Brexit referendum. In conclusion, Sacred Britannia is quite possibly one of best reference books on Romano-British religious syncretism of the last few years. Its tie-ins with contemporary events in addition to its extremely accessible yet skilful and erudite style will satisfy casual readers and academics alike. I could not possibly think of a much better guidebook to take with me on a journey into the mysterious yet fascinating world of Romano-British religion.