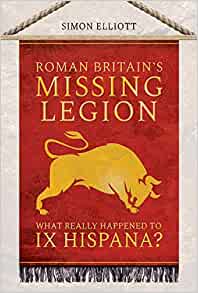 The unexplained disappearance of the legio IX Hispana (also known as the Ninth) from historical records around the second century AD has caught the public imagination for centuries, giving rise to a wealth of literature as historical novelists and academics alike have been entranced by this mysterious legend. According to the nineteenth-century German historian Theodor Mommsen, the Ninth Legion may have been wiped out by local forces while campaigning in northern Britain around AD 108. Mommsen’s authority provided the basis for Rosemary Sutcliff’s 1954 masterpiece entitled The Eagle of the Ninth and its subsequent tie-ins and film adaptations. In Sutcliff’s historical novel, the main character, former army veteran Marcus Flavius Aquila, travels beyond Hadrian’s wall to find out what happened to his father and the rest of his legion, the legendary Ninth. Much to his dismay, Aquila discovers that his father’s legion had been overrun during an uprising of the northern tribes. While Sutcliff’s novel has certainly contributed to the creation of the Ninth trope, several other authors, buddying sleuths and even world- renowned academics have all attempted to solve this baffling mystery. Some historians have tried to debunk the old trope about the destruction of the Ninth in Britain, arguing that the legionnaires had in fact perished in Continental Europe, somewhere along the Rhine-Danube border.

Some other historians have surmised that the legion may have met their demise in the Middle East at the hands of Parthian forces around AD 160. In equal fashion, Simon Elliott here conducts a thorough analysis of classical Ro- man sources, historiographical accounts, latest archaeological finds, and epigraphical evidence in his attempt to solve this two-thousand-year-old mystery. In the process, he comes up with four possible hypotheses of his own, which he carefully puts to the test. The book is divided into six chapters and includes a conclusion where Elliott summarises his findings. The first two chapters are, respectively, about the Roman military system and Roman Britain and provide a wealth of crucial information, especially for readers with little knowledge about Roman history. A military historian at heart, Elliott does an excellent job in explaining how the Roman military system worked and evolved over the centuries. In a clear and coherent manner, he describes the structure of the Roman army and the reforms which gradually transformed it over the three main stages of Roman history. These include the Tullian reforms promoted by the sixth king of Rome Servius Tullius, the revolutionary Camillan system of Marcus Furius Camillus during the Roman Republic and subsequent minor changes introduced by the Polybian system, and finally the Marian system and the Augustan ones.

There is also a fascinating section on the auxilia, the allied troops made up of non-Roman soldiers who fulfilled various tasks on the battlefield. Elliott relies on classical historiography to describe what the daily life of legionnaires was like. Accordingly, he offers a thorough description of their typical diet, their armours and weapons (to a certain extent even their daily rota!) and the nickname given to a legion. Roman legions were named after the places where they had won the most battles and their names could also change. For instance, before being stationed in the Iberian Peninsula, the legio IX Hispana had previously been known as legio IX Macedonia. Having provided an extremely comprehensive de- scription of Roman politics and military life, Elliott then examines all the classical sources at this disposal which record the history of the legendary legion, beginning with its possible creation under Augustus and including its transfers in Africa, Hispania, where it got its name, and finally in Britannia.

In the second chapter, Elliott outlines the main features of Roman Britain, from the first incursions under Caesar to Boudicca’s revolt and the establishment of a fortress at Eboracum by the Ninth Legion (in modern day York). In addition to the interesting narrative about the events following the Boudiccan revolt, this chapter provides a plethora of insights into legionary activity during the first century AD, telling us how they built fortresses that later became major cities, such as Exeter, Gloucester, Lincoln, Manchester (Mamucium for the Romans) and of course York. The focus of Elliott’s narrative in this chapter is the presence of the legion in the North, which provides the basis for the theory that he explores in far greater detail in the following chapter. In the third chapter, Elliott finally considers the theory that the legion may have been obliterated by the Caledonians while campaigning in the far north and those who were still alive subsequently disbanded.

Already set forth by Theodor Mommsen in the nineteenth century, this hypothesis is based on evidence by the Roman author Tacitus in the context of Agricola’s campaign to conquer the far north of Britain. Tacitus records a specific incident occurring in the governor’s sixth year in office when his legionary spearheads were driving through Fife up to the River Tay and beyond. According to Tacitus’ version, the soldiers of the Ninth were attacked by the Caledonians in their camp under the cover of night. Despite being caught unawares, the Romans still bested the Caledonians and responded by pushing further north. However, as the camp had almost been overrun and the number of Roman soldiers had dwindled, they would perish shortly thereafter at the hands of a much larger band of Caledonians. Another possible theory is that the legion may have been wiped out in AD 117, at the beginning of Hadrian’s rule.

This idea relies on contemporary events regarding a military crisis in the North caused by an uprising of the Brig- antes or farther north in Scotland. Such theory might not sound too far-fetched if one considers that the legio IX Hispana was at the time stationed in the recently conquered territory of the Brigantes who were still understandably seething, as Elliott delineates in Chapter 2. For Rosemary Sutcliff’s fans, the annihilation of one of Rome’s mightiest armies at the hands of an underdog will clearly be the most appealing theory. However, as Elliott warns, while the annihilation of the legion in the far north remains