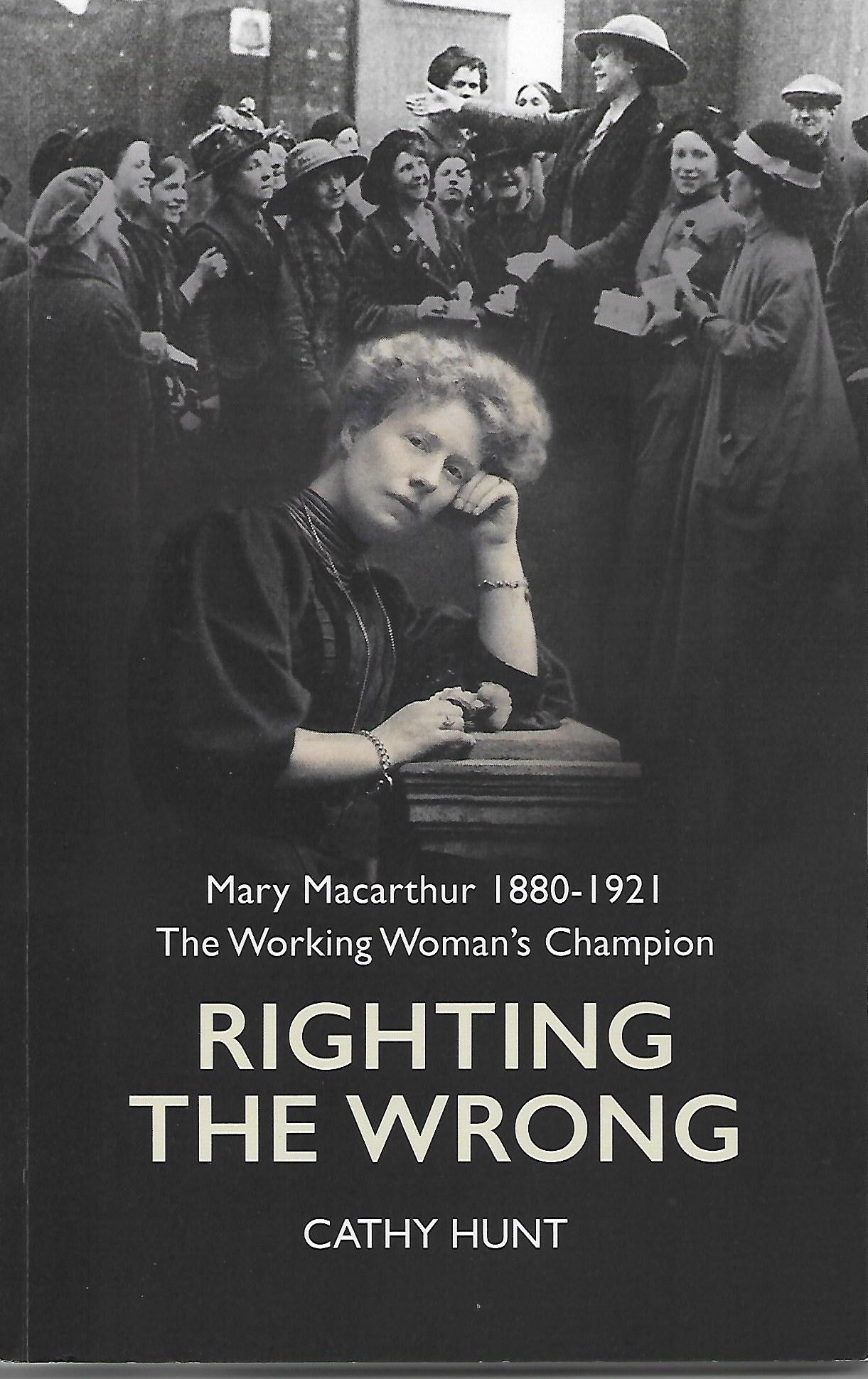 Cathy Hunt is a well known Midland historian who specialises in the history of labour together with the work of women. The book is the product of extensive recent research, so recent that its publishing date was delayed to allow for the inclusion of such research.

Many would recognise the name Mary Macarthur and would couple it with the strike of the Cradley Heath women chainmakers. Quite rightly too. However, as Hunt ably demonstrates, there was more, much more to Mary Reid Macarthur than that one event as important as that was.

Hunt’s book deals with Macarthur’s life literally from cradle to grave and is the first full length biography of this pioneer since Mary Agnes Hamilton’s Mary Macarthur: A Biographical Sketch was published in 1925. It is obvious that a new examination drawing on fresh research is long over due.

Mary Reid Macarthur was born on 13th August 1880 the first surviving child of John and Agnes Macarthur. John Duncan Macarthur was a very successful businessman building up the family business, situated in Sauchiehall Street, Glasgow, so that he could now offer a complete outfitting service for Gentlemen, Ladies and Children. This was, obviously, a high class business; some of Macarthur’s ladies jackets could cost between six and ten guineas. This at a time when a shop assistant was doing well to get ten guineas a year.

Mary Macarthur had a good education. She went first to the private Langside Academy but soon transferred to Garnethill School. This was run by the Glasgow School Board and offered a comprehensive if basic, education for children from 5 to 13 plus a higher education for girls. Here Macarthur was fortunate in not only having a father who believed in education for girls, but also living within the boundaries of such an enlightened school board.

In 1895 John Macarthur sold his Glasgow business, moved with the family to Ayr where he started another. It was around this time that Mary spent a year in Germany, perhaps going to school there. Continental travel etc. in the late 1890s was not so unusual as we might imagine. Anyone who has read Eleanor Constance Lodge’s autobiography will attest to that. It may be that Mary was sent to one of John Macarthur’s German business contacts, for when Mary returned her father employed her as his bookkeeper. Taking into consideration of the nature of his business, adding the fact that he had three daughters, for all we know it may be that John Macarthur intended to have Mary run it. [Please don’t tell me that women didn’t run businesses at the turn of the nineteenth century.]

Enough of the conjecture. It was at Ayr that Mary blossomed. There were so many societies of all types. It was at Ayr that Mary’s socialist/ trade union tendencies came to the fore. It was also at Ayr that Mary first met William Crawford Anderson, a like minded gentleman who later, after she had finally agreed, would become her husband. In early 1901 Mary attended her first union meeting. It was of the Ayr branch of the National Union of Shop Assistants, Warehousemen and Clerks. She initially declined the invitation to join, because she was working for her father. However, join she must, because by the end of 1901 she was President of that very branch. Yet another middle class woman joining the reforming ranks. Was this the only class with the time, the education and the money to do so? All three certainly helped.

It was as this branch’s President that Mary attended a meeting of the union’s Executive Officers in Newcastle in 1902 and it was there that Mary first met Margaret Bondfield. It was to be a meeting that had monumental outcomes.

Bondfield would visit the Macarthur family in Ayr and formed a strong friendship with John Duncan Macarthur. It also seems likely that Bondfield persuaded Mary to move to London for she went in early summer 1903 with no offer of a job or any accommodation. It seems likely that Mary stayed with Bondfield in the flat above the union’s headquarters. Mary first found a job as a bookkeeper however, by July of that year when the Secretary of the Women’s Trade Union League (The League) resigned Mary was offered the job. The story of Mary Reid Macarthur was off and running.

Cathy Hunt naturally deals fully with this later part detailing the many disputes in which Mary played a leading role. Hunt notes the extensive travelling that Mary undertook scurrying from dispute to dispute, meeting to meeting, conference to conference. Mary made numerous visits outside of the UK, the USA being a favourite destination. To go into details here would be akin to rewriting the book.

Mary Macarthur obviously had the ability to ‘get on’ with the Upper Classes as well as the working women. During the Cradley Heath chainmakers strike she persuaded the more altruistic employers that the middlemen, who were enslaving the women workers, were actually undercutting the employers prices and taking business from them. It is thus no surprise that those employers supported the strike. Furthermore this support included a minimum wage for the women who made finer chains in forges attached to their hovels. Payment for these chains was allotted by weight not length. The heavier gauge chains were made by gangs of men working in factories. This minimum wage marked a seismic shift in women’s working practice.

She made friends among the powerful, people such as Keir Hardie, Charles and Emilia Dilke of the The League. In 1915 she became firm friends with Queen Mary. The same did not apply to David Lloyd George.

Working under her supervision may not have been a garden of roses. The impression of her management style came across to me was ‘my way or highway’. See pp 73-5 for evidence of this trait.

So what did I think of Righting the Wrong? [ notice the singularity]
Cathy Hunt deals very sympathetically with Mary Reid Macarthur and her reforming career. Sometimes I felt that the book was more a eulogy than a critique. The early pages seemed to have something of an Eric Morecambe feel to them ‘all the right words but not necessarily in the right order’. Characters were introduced on pp30-4 when really their story was set much later. Why place so much emphasis on Jessie Main? Do we need to know that she would become General Secretary of the National Federation of Women Workers (NFWW) which was founded some three years later? Or the fact that George Dallas who had criticised Mary would become the Chief Organiser for that union? More attention would be paid to them on p73.

I really couldn’t understand the salaries quoted.
On page 36 Hunt quotes Mary Macarthur’s yearly salary on her commencement as Secretary of The League. “It was agreed at £1104, 3 shillings and 4 pence.” This was in 1903, furthermore it was a quarter of that organisation total expenses and over £50 more than was paid to any other staff. From MeasuringWorth.com such a salary equates in 2018 to between £116,472 as purchasing power to £282,293 as income value. Not bad when one remembers that the sub-chapter on page 42 is entitled Learning the Ropes. On page 42 when Mary Macarthur and Will Anderson were a married couple they were dependent on her salary from The League which is quoted at £200 per annum.
Incidentally £200 is about the going rate for Lady Factory Inspectors in 1907

I also think that John Duncan Macarthur was more enlightened than Hunt is prepared to admit.

There are plenty of excellent illustrations most, naturally, featuring Mary Reid Macarthur. However, I would have thought that it would be beneficial to have included the well known photographs of ‘Chainmakers at their workshop doors’ and ‘Brickworkers’ both are at Birmingham Public Library. Thankfully the book has an index and joy, Oh joy a timeline.

So is it worth the £20 asking price? Oh! absolutely. Cathy Hunt has written an excellent biography of Mary Reid Macarthur. Hunt has detailed Mary Macarthur’s short life but full life. (Macarthur died on 1st January 1921 from Ovarian cancer, Will Anderson had passed away on 25th February 1919 in the Spanish Flu epidemic. They left a daughter Nancy who was born in 1915). Furthermore, in doing so, Hunt has added to our understanding of the struggle for the rights of women workers in all industries. Whether these industries be chainmaking, munitions or shopworking. as I said at the start there was much more to Mary Macarthur than the Cradley Heath strike. Anybody with an interest in women’s work should consider Righting the Wrong as an essential addition to their library.