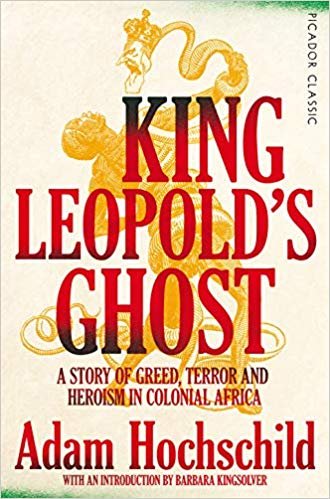 King Leopold’s Ghost: A Story of Greed, Terror and Heroism in Colonial Africa

The author, Adam Hochschild, an American journalist and historian, whose particular interest are human rights and social justice, tells a gruesome story of exploitation, cruelty and forced labour in what became known as the Belgian Congo, a large, heavily-forested area in equatorial Africa through which the huge River Congo flows. From 1885 to 1908, Leopold II, King of the Belgians held this productive area as his personal possession: it was not part of the Kingdom of Belgium. From a distance of several thousand miles away, through his henchmen, he extracted huge wealth by brutal methods. This is fully chronicled in King Leopold’s Ghost. The basis of his wealth was firstly the export of ivory and then rubber; the latter obtained from wild vines rather than cultivated trees.

The latter became important to provide a better ride in the new- fangled motor car — another evil to be laid at the door of the emerging automobile industry. According to Hochschild, population of the area was halved during this period, due to amongst other things, deaths from violence and a reduced birth rate consequent on the disruption of native societies. Eventually, as a result of the first international human rights campaign of the twentieth century, the Belgian state took over responsibility for this colony.
The cast list of ‘baddies’ and ‘goodies’ includes a diverse cast of characters: ranging from a European monarch, through many anonymous Europeans serving as local agents or as officers in brutal Force Nationale; and, on the other side, Afro-American and European missionaries and a miscellaneous group of Europeans, a couple of whose fame arises from events unrelated to their time in the Congo.

Top of the Baddies List is, of course, Leopold, whose kingdom was only created in 1830. The new state’s ruling family was recruited from the Saxe-Coburg dynasty, making him a cousin of both Queen Victoria and Prince Albert, of whom he was the complete opposite in character and morals.
Henry Morton Stanley, an important publicist and influencer of world opinion in favour of his employer, is best known for the statement, ‘Dr Livingstone, I presume’ though doubt has been thrown on this story, since he was the only authority for that story and he was never a reliable witness. Starting life recorded in the St Asaph Parish register as “John Rowlands, Bastard”, he had a troubled childhood, abandoned by his feckless mother and spending much of his childhood in a workhouse. Reaching America as a crew member, he jumped ship and found his niche as a journalist and explorer. As well as finding Livingstone, he traced the path of the mighty Congo from its source in Eastern Africa. Using his journalistic skills, he helped Leopold to masquerade as a philanthropist and humanitarian, whose aim was to ‘civilize the natives’, and gain the support of the American government, which recognized the King’s private territory as the Congo Free State.
The leader of the opposition was E D Morel, a Liverpool shipping clerk. Sent by his employer, on account of his ability in French, to check on the trade carried on by the company’s ships between Belgium and the Congo, he noted three matters of great concern.

Firstly, these ships were carrying prodigious qualities of cartridges and guns to the Congo; secondly; “the amount of rubber and ivory brought home from the Congo, in the company’s ships …greatly exceeded the amounts indicated in the Congo Government’s returns and finally he noted that of the articles being exported to the Congo ‘something like 80% consisted of articles which were remote from trade purposes (nothing was going to pay the natives for the rubber and ivory being exported). From this evidence he deduced that ‘forced labour of a terrible and continuous kind could alone [account] for such unheard-of profits…forced labour in which the Congo Government was the immediate beneficiary; forced labour directed by the closest associates of the King himself’

Hochschild summarizes this saying, ‘With this brilliant flash of recognition by an obscure shipping-company official, King Leopold II acquired his most formidable enemy.’ Morel founded the Congo Reform Society and exerted pressure by speeches and publication of a journal. Others raised concerns; notably two whose names live on because of other events.
A British consul who delivered a formal report to the British Government after an investigative trip (at their request) to the interior. was rewarded with a knighthood. But during the First World War he gained notoriety. Sir Roger Casement is remembered today for his treachery to Britain and support for Irish Nationalists, which led to him being executed as a traitor during the First World War.

In 1890, Casement met a young Pole, Konrad Korzeniowski, working as a ship’s officer who made one journey up the river, with the aim of obtaining a job as a ship’s master. Hochschild, quotes from a novel this sailor wrote drawing on his experiences in the Congo. In the voice of the narrator, Marlow, he recalls how during the hike around the rapids on the river, people had fled to avoid being conscripted as porters:

The population had cleared out a long time ago. Well if a lot of mysterious niggers armed with all kinds of fearful weapons suddenly took to travelling on the road [in England] between Deal and Gravesend catching the yokels right and left to carry heavy loads for them, I fancy every farm and cottage thereabouts would get empty very soon.

The villain of the novel, Mr Kurtz an agent, according to Hochschild, was an amalgam of real people. One particularly horrible episode is when Marlow ‘looks …through his binoculars only to find Kurz’s collection of the shrunken heads of African “rebels’. This may have been based on a later episode when ‘a British explorer- journalist… described the aftermath of a punitive military expedition against some African rebels: “Many women and children were taken, and twenty-one heads were brought [back] and have been used by Captain Rom as a decoration round a flower- bed in front of his house.”

Joseph Conrad, for that is the name we know the erstwhile sailor as an author, evokes the unbelievable cruelty of King Leopold’s agents in his grim novel, Heart of Darkness.
Hochschild, provides a prequel to this period demonstrating that European exploitation of Africans had a long history. Letters written by an African, King Affonso I a Christian literate in Portuguese, writing during first four decades of the sixteenth century to his fellow monarchs, Portuguese kings, provide a rare demonstration of how the natives viewed the European colonisation of their lands. The theme of these letters ‘the traders are kidnapping our people’ was precipitated by the nascent slave trade. A particularly sad personal experience for him occurred. In 1539 when’ ten of his young nephews, grandsons and other relatives who had been sent to Portugal for a religious education … disappeared en route’ — it appears to end up in Brazil as slaves.
The author highlights two other issues. Exploitation of African natives continues today- now not by foreigners but by the many dictators who having risen to power and reduced their countries, often extremely rich in natural resources — the Democratic Republic of the Congo (formerly Zaire has huge reserves of important minerals — to poverty whilst (as Leopold did) investing money in grotesque buildings. Further he extends his accusations during the nineteenth-century ‘Scramble for Africa’ to other imperial powers, colonizing nearby territories, such as France in the French Congo and the new German Empire in Namibia.

This is an important book, but one that is difficult to read being very emotionally charged. The sub-discipline of global history has gained in importance in recent years.

Many of us are led to study through the OU because of our interest in British history. We need to be aware past international events in order to understand the modern-day world. It was an English man who led the world wide opposition, but can Britain, as a whole, be considered innocent of exploiting the peoples of the African continent?